Today we’re excited to release the final episode of our recently recorded podcast with Saifedean Ammous. This is definitely the most controversial of the three episodes where we get into Covid-19, shelter in place versus freedom of movement, Ammous’ views government control run amok and even talk about 100% meat based diets. You won’t want to miss this somewhat crazy conversation!

This morning I listened to Goldman Sachs’ webcast of their analyst call on the state of the economy. They included slides on Bitcoin that were markedly bearish on both Bitcoin and the Cryptocurrency market as a whole. Two anecdotes came to mind during the call.  First, I can still remember a 1993 (or 1994) report from a Wall St. technology analyst like it was yesterday.  It basically read like this… “The Internet will be useful for porn and gambling. That’s all.”  Second, I couldn’t help but think back to the panel I did with Nouriel Roubini where he trash talked Bitcoin with no logical argument to back up his case.

Easter Egg Time: I’ve embedded one easter egg giveaway in the article for those that are patient enough to make it through!

I’d strongly encourage everyone (especially these Goldman Sachs analysts) to read Matt Huang’s excellent article: Bitcoin for the Open Minded Skeptic.  The important TL/DR of Matt’s article for me is: Bitcoin is a new monetary asset that has its own unique adoption curve that may eventually become a great store of value. “Since monetary assets do not arise frequently, Bitcoin is likely to challenge our ordinary intuitions, and it has stirred (understandable) controversy in the investment world.”

Rather than go on an emotional tirade against Goldman’s perspective on Bitcoin, which might be more fun, I’ll break it down for you as I see it as logically as I can. Basically I see four key issues with the Goldman Bitcoin analysis: One, they don’t seem to understand or don’t want to acknowledge what a deflationary asset is or what eventually happens to all inflationary assets over time;  Two, they don’t want to acknowledge the true nature of Bitcoin’s scarcity, or the strength of its hardened network leading to its value as the best hard money ever created;

Three, they don’t understand the nature of hard forks and incorrectly assume that just because a hard forked cryptocurrency contains the name Bitcoin that it mitigates Bitcoin’s scarcity feature; Lastly, they associate Bitcoin with scams and ponzi schemes without acknowledging the Internet’s own sordid past and beginnings and parallels to Bitcoin’s own potential market maturation.

First, they don’t seem to understand or don’t want to acknowledge what a deflationary asset is or what eventually happens to all inflationary assets over time. That is understandable as these economists and analysts are paid and incentivized to operate within the existing Keynesian system of government based inflationary economics. To a certain degree we all are incentivized to support the current system since we all need to pay our rent (or mortgage) and our other bills. That is until the system breaks down, which when it does, the game of musical chairs will be over, and someone will be left with no chair to sit in. Intellectual honesty would dictate that Goldman acknowledge this. Paul Tudor Jones, the famous hedge fund manager, recently came to this conclusion in a very public way. But they likely never will until it’s too late or until everyone else forces them to. In his master work, Human Action: A Treatise on Economics, Ludwig Von Mises lays out the fundamental truths of so called monetary expansion that every person on the planet should learn in school but obviously does not:

“Economics recommends neither inflationary nor deflationary policy. It does not urge the governments to tamper with the market’s choice of a medium of exchange. It establishes only the following truths:

In the long term, Von Mises is right and Goldman analysts are wrong. That doesn’t mean that you can’t make money listening to Goldman in the short term. But Bitcoin to me is the ultimate long term hedge. When the dangers of inflation of the currency and economy are realized the inflationary currency’s value goes to zero and the deflationary currency’s value on a relative basis goes to infinity. Which would you rather own when that happens?

Second, they don’t understand or want to acknowledge the true nature of Bitcoin’s scarcity, or the strength of its hardened network leading to its value as the best hard money ever created. The best resource I have found to explain this is Saifedean Ammous’ book, The Bitcoin Standard. If you’ve gotten this far in the article you’ll be happy to find easter egg number one: to coincide with our release of the final episode of our three part podcast with Saifedean we’re giving away a signed copy of his book.  Simply tweet about the episode mentioning our twitter handle, @abraglobal in your tweet for a chance to win the signed copy of the book. All winners will be announced by June 5th. 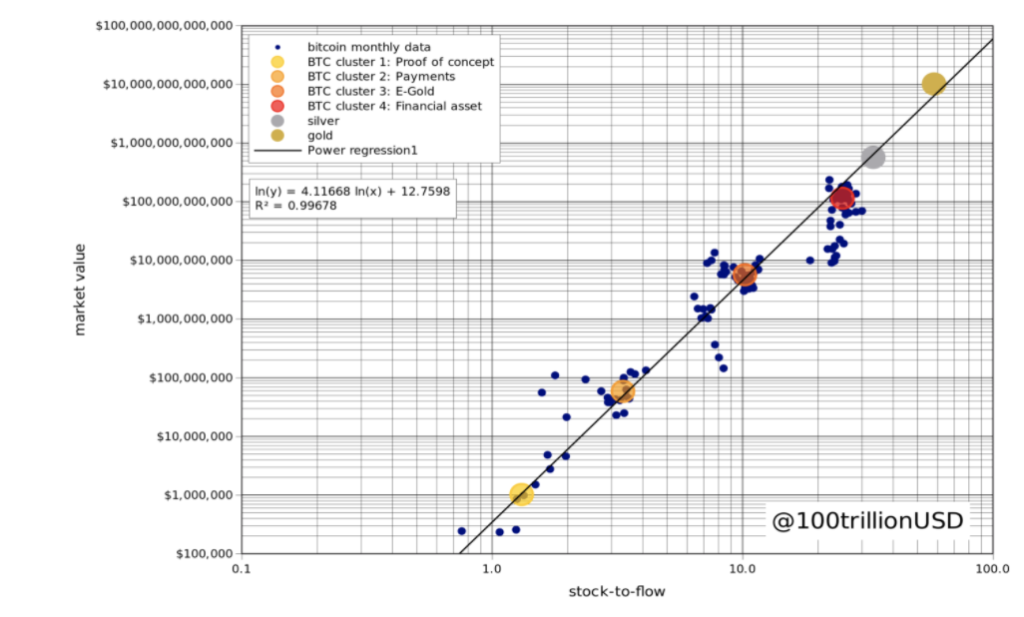 Bitcoin Stock to Flow Cross Asset Model via Plan B

As Ammous explains and Plan B has recently tried to codify with great fanfare hard money is best understood via its stock to flow ratio which is an asset’s existing supply vs the relative rate at which the supply will be increased at any time in the future. Bitcoin has been getting a lot of attention lately because of its potential to have the “hardest” stock to flow ratio of any asset ever, eventually approaching infinity. But Goldman would have us believe it’s not a new asset class.

Third, they don’t understand the nature of hard forks and incorrectly assume that just because a hard fork contains the name Bitcoin that it mitigates Bitcoin’s scarcity feature. Their report actually states (I’m not making this up:) “Though individual cryptocurrencies have limited supplies, cryptocurrencies as a whole are not a scarce resource. For example, three of the largest six cryptocurrencies are forks—i.e., nearly identical clones—of Bitcoin (Bitcoin, Bitcoin Cash, and Bitcoin SV).” This is a ridiculous statement. Anyone and everyone can create a fork of the bitcoin software and start mining a new cryptocurrency from scratch. They can call them Bill Coin 1, Bill Coin 2, Bill Coin 3, etc, etc. Their code would effectively mirror bitcoin’s. Does that affect the scarcity of Bitcoin? Obviously it does not. This point is so obvious to anyone with a modicum of understanding as to what is going on that I’m shocked that they would try to make this point at all. The fact is that computer software is not a scarce resource and that does not affect the scarcity of Bitcoin or any sufficiently decentralized cryptocurrency. If there were any validity to Goldman’s point about Bitcoin not being scarce then the creation of new coins would constantly erode Bitcoin’s market dominance within the crypto space.  As you can see from the above chart, not only is this not the case, but Bitcoin’s dominance in terms of market cap had been steadily increasing for many months and has held steady at about 67% since bottoming out during the ETH/ICO boom of 3 years ago.  Bitcoin hard forks have also had negligible impact on this chart.

Lastly, I can remember first hand the early days of the transition to a fully commercialized Internet. I’m sure it was ugly to many of you in many respects; think porn, gambling, ponzi schemes, etc. But I am certain that the Internet would not have evolved into what it is today, perhaps the greatest invention of the computer industry, if it weren’t for these entrepreneurial early adopters wreaking havoc on the people connected to the early Internet. Fast forward 25 years and the fact that scammers are able to use Bitcoin proves that it works as intended, in other words as a trustless, governmentless digital currency. I hope these scammers rot in hell but there is no denying that they prove Bitcoin works. Yet another point that the Goldman analysts don’t want to recognize, appreciate or understand.

Does the Goldman report get anything right as it relates to Bitcoin? They did get the Bitcoin volatility numbers right without mentioning any of the big stock market drawdowns of the past 50 years or mentioning the stock to flow potential of Bitcoin. Eventually all government issued currencies fail, the question is what shocks to the system will accelerate the process towards getting us there. A global pandemic perhaps? At a minimum Bitcoin becomes a reasonable insurance policy for when this happens and if history is any guide it is all but guaranteed to happen …eventually.